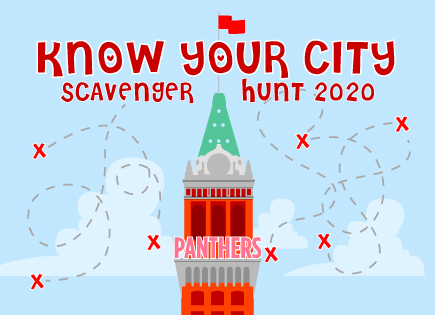 This has been a school year like no other but the one thing that remains consistent is the desire to give our students the best learning experience we can. All proceeds will go towards various enrichment programs, such as Chorus and STEM, that will provide our students the opportunity to learn new and exciting skills.

While respecting social distancing efforts, we’re encouraging kids and their families to get out of their homes and learn more about Oakland!

You can help sponsor our kids as they visit 10 local landmarks unique to the great city of Oakland! Any amount you can sponsor with will be greatly appreciated by the PTA, the teachers and most of all, the students. Please help us to maintain and bring more enrichment programs to Piedmont Avenue Elementary School.

For this event, kids will try to visit each landmark listed below and report back to their sponsors with photos.

The Oakland landmarks for this year’s event include:

1. THE LAKE MERRITT MONSTER
Created by Robert Winston in 1952, this sculpture was built as a children’s play structure but fell into disrepair and was closed for many years. Only recently brought back to life (thanks to various fundraising efforts including those of the Lake Merritt’s Mid-Century Monster Fan Club), this sculpture was reopened in the summer of 2019. (Music trivia: This sculpture was also featured on the album cover for San Francisco's Sly & the Family Stone’s ‘Dance To the Music’ - ask your parents and grandparents about that one!)

2. KEY ROUTE PLAZA
At the corner of Piedmont Avenue and 41st St, there is a monument at the foot of the Piedmont clock tower that is dedicated to the former transit station. The building located at the base of the tower is all that remains of the Key System’s C-line station, which welcomed its first train arrival in 1904. Before BART provided public transport across the Bay, the Key System (or Key Route), founded by Francis Marion Smith, operated in the East Bay from 1903-1960 and began transporting commuters across the Bay Bridge in 1939.


3. REMEMBER THEM: CHAMPIONS FOR HUMANITY MONUMENT
Sculpted by Oakland sculptor, Mario Chiodo, and formally dedicated in 2013, this sculpture is located at the Henry J. Kaiser Memorial Park at the corner of 19th and Rashida Muhammad Streets. It is a large monument dedicated to Civil Rights and includes many global figures, including Maya Angelou, Ruby Bridges, Cesar Chavez, Frederick Douglas, The Rev. Dr. Martin Luther King, Jr., Oskar Schindler, and Elie Wiesel.

4. CLEVELAND CASCADE
A staircase park planned by landscape architect Howard Gilkey and built in 1923, the stairway was influenced by Italian fountains. After a long period of neglect, rehabilitation of the stairway began in 2004. Originally featuring a cascade of flowing water in the center, the water features have been replaced with a garden. Thanks to the continual work of the Friends of the Cleveland Cascade, the stairway remains popular with Oakland residents.

5. IT'S ALL GOOD BAKERY
The building that houses this bakery is the location of the first headquarters of the Black Panther Party. The Black Panther Party was an organization founded in 1966 in Oakland to help protect the African-American community. Despite various controversies, this group began various community social programs for Oakland residents including the ‘Free Breakfast Program’ which helped feed children in need and provide them with energy to improve their learning.

6. GNOMES OF OAKLAND
You may have seen these gnomes on a walk at some point. These gnomes have been painted, anonymously, on pieces of wood and tacked to the bottom of utility poles and other spots throughout Oakland. It’s rumored that there are over 2,300 around the city and new gnomes have appeared since the outbreak of COVID-19, reflecting the social interactions of today (i.e., Zoom meetings and face masks). See if you can find one (or more)!

7. JACK LONDON'S CABIN
Jack London was an American novelist known for books such as ‘Call of the Wild’ and ‘White Fang.’ Although both of these stories take place in Canada, Jack London was actually born in Oakland and lived here in his youth. He later lived in a cabin in Canada, built right before the Gold Rush of 1898. Many years later, this cabin was re-discovered, dismantled, and two replicas were built with the original logs. One of these is now located in Oakland.

8. MARCUS BOOKS
The first Marcus Books was opened in San Francisco in 1960 and this second Oakland location opened in 1976. The shop was opened by Julian and Raye Richardson, community activists who wanted to provide a source of literature by and for the African-American community. After receiving a Doctorate in Literature from U.C. Berkeley, Raye Richardson eventually became the chair of the Black Studies department at SF State University. Many famous African American figures have visited the store or hosted readings, including Oprah Winfrey, Cornel West, Queen Latifah, Maya Angelou, Toni Morrison, and Kareem Abdul Jabbar. Despite facing various financial challenges in recent years, the store continues to operate, selling a range of books, including children’s books, focusing on Afrocentric literature.

9. 'THERE' SCULPTURE
“…there is no there” is a phrase many people associate with Oakland. This was written by Gertrude Stein, an American novelist and art collector, who grew up in Oakland from 1880 to 1891. By the time she returned, 45 years later, the city had grown and changed from what she remembered as a child, leading her to write the famous phrase. In honor of this phrase, a sculpture was built by Roselyn Mazzilli and installed in 1988 in City Center plaza.

10. CHILDREN'S FAIRYLAND
Located on Lake Merritt, Children’s Fairyland is known as being the first storybook theme park. Operating since 1950, the park is filled with sculptures, playgrounds, and rides that have kept their look since that time. It has been said that Walt Disney visited the park and used some of the ideas for Disneyland. Grab a photo, if you can, in front of the famous shoe in which an old woman lived.

Good luck finding them all and have fun!

Your donations will help pay for:

Get out, have fun and find those landmarks! Know your city!

Good job finding those landmarks! Find them all!